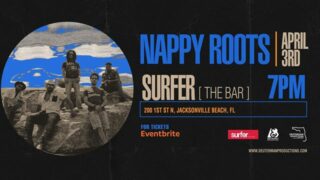 Country and proud of it, Nappy Roots formed in 1995 around a sextet of students attending Western Kentucky University in Bowling Green. Four members of the group were Kentucky natives (Skinny DeVille, B. Stille, Ron Clutch, and Big V), bolstered by an Oakland transplant (R. Prophet) and a Milledgeville, Georgia native (Fish Scales). Nappy Rootsbegan making music together at a local record shop-cum-studio named ET’s Music, and released their full-length debut, Country Fried Cess, in 1998. Drawn to the group’s distinctive twist on Southern bounce, the major labels began flocking, and they eventually signed to Atlantic. Their label debut, Watermelon, Chicken and Gritz, was released in 2002, and the follow-up, Wooden Leather, arrived one year later. After several delays, the group released its anticipated album The Humdinger in August 2008; it was the first not to feature R. Prophet, who had left the group to pursue a solo career. Their second album as a quintet, The Pursuit of Nappyness, was issued two years later. Their fifth effort, 2011’s Nappy Dot Org, was a collaboration with famed Atlanta production team Organized Noize. While they released a mixtape in 2012 titled Nappy Roots Presents Sh!ts Beautiful, the group would not return until 2015 with the release of album six, The 40 Akerz Project. A sequel, Another 40 Akerz, arrived in 2017 and featured guests like Ashley Rose, Gareth Asher, ForteBowie, Jarren Benton, and more.

Use the share tools on this event page to let your friends know where you will be. Please Print PDF ticket for entry into event or your phone email can work as well. No Refund Event. Rain or Shine Event.